Located just on the side of the Praça Martim Moniz, next to a bus stop where you know just by the long queue of tourists that the 28 must stop here, Ai Mouraria is a small wine bar that can be missed easily. The small red entrance with a portrait of Amália Rodrigues and a quote by Fernando Pessoa reveals little that this could be more than just a tourist trap. If it were not for the esplanade outside of the café that invites the passer-by to have a rest, we probably would not have given it a thought. However, as it lays just on the way to the many Asia stores that are located between Martim Moniz and Intendente we have spent several lazy sunny afternoons here, our bags filled with kimchi, green onions and hot pepper paste for one of Nora’s famous Korean dinners.

Zipping on a glass of red wine, Nout and I love to sit here, observe the hustle and bustle of this multicultural neighbourhood. Chinese vendors with huge plastic bags hurry past, some Pakistani are sitting on a bench and play with their phones, tourists wander around and we sit and talk about food (what else?). The wine selection is okay, nothing exceptional but all of them decent Portuguese wines. So, okay, we hear you mumble, why bother writing a review about it then?

It’s the food, glorious food! Yes, they offer the usual sandwiches and toasts with ham and cheese that you find in every pastelaria. However, we were more drawn to the empadas, small pot pies that are homemade by family members, as the waitress assured us. The fillings sounded promising like chicken and bacalhau with spinach but also quite unusual like a vegetarian empada filled with red cabbage. The crust actually looked crispy and had a pretty egg glaze shine that is non-existent on their mass-produced counterparts. 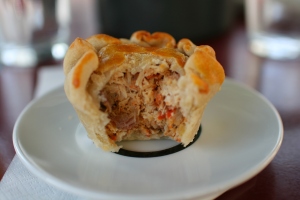 And oh, the taste! In the name of all the kittens that we still want to buy, we bet that all these empadas are indeed homemade, kneaded and filled with lots of love by a grandma in her small kitchen! The traditional empada de galinha was succulent and meaty and actually had the taste of roast chicken. The same goes for the silky bacalhau, and the combination with the spinach enhanced and complemented the flavours – and normally I’m not even a big fan of bacalhau. 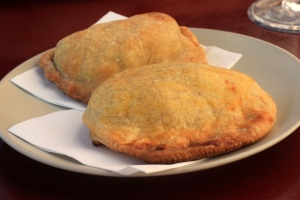 And then the vegetarian empada – we couldn’t believe that red cabbage could taste so good. I don’t want to bash again against Portuguese vegetarian cuisine (that deserves its own article…) but they mainly fill their dry empadas with boring soja and seitan while you actually could put some crunchy, fresh red cabbage in it. Who would have thought.

Lastly, if you want something for your sweet tooth, this place also knows how to surprise: a pastel de nata cake… Yes, a cake with a sweet and luscious custard filling.

Admittedly, for us it could not beat their empadas or – perish the thought – the heavenly pastel de nata from Manteigaria but why on earth has nobody else come up with this idea so far?

So this it, the first veracious representative of our new category “Little wonders” – who would ever think that some of the best empadas of Lisbon hide in a small wine bar just of the centre? But better get here early, they sell out quickly!