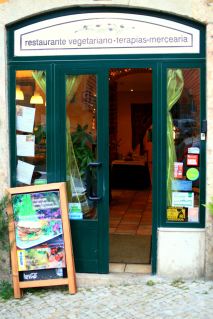 was a warm evening in May when we decided on a whim decided to go to “Jardim dos Sentidos” (Garden of the senses), a vegetarian restaurant just around the corner from Praça Alegria. Going to a vegetarian restaurant in Lisbon is always a bit of a gamble and with rather accessible prices and a varied menu with influences from cuisines from all over the world, ”Jardim dos Sentidos” is very appealing.

Admittedly, it wasn’t our first time in “Jardim dos Sentidos”: I had previously tried the buffet (mediocre, but hey, it’s a buffet, what do you expect?) when the budget was tight and had come back with Nora another time for dinner and had a rather good Mexican taco with vegetarian chili. It’s a nice restaurant, with a cosy bambu-themed interior and there’s even a patio where especially on summer evenings it’s nice to sit underneath the sail.

Unfortunately, foodwise not everything was convincing: the appetizer for instance left us with mixed feelings. The tofu-red cabbage-carrot mixture worked well (but was a bit too salty) but the dry vegan pancake underneath and the seriously intensely flavoured dots of pesto on the side of the plate were confusing and collided head-first with the Asiatic red cabbage topping. Thumbs up for the initial idea, but execution was only halfway there. 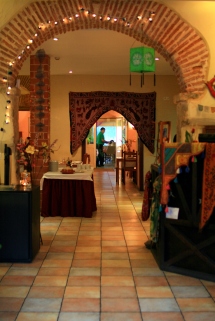 it was called “Jardim da Eva” (Garden of Eva) with the main sin being that it was well… not a dish. A mixture of rice, quinoa, pumpkin, nuts, all of it nice and well prepared but it lacked coherence: it felt like a lonely side dish looking for a friend, e.g. a stew or tagine I imagine would have made a substantial difference. However, the seitan hamburger on a “bolo do caco” (a soft bread made from sweet potato, a perfect burger bun), much as I detested seitan previously, tasted great and the sweet potato fries were crispy as they should be. I missed some mayonaise or other sause to really bring it all to life, but unfortunately, Lisbon restaurants often mistake vegetarian for healthy food. What to do.

However, a good old ear-ringing smack around the head to whoever came up with the salads with lack of dressing and the addition of apple (someone should tell them that salads have evolved since the 80s!) .  Also a proper spanking for the absolutely horrendous cheesecake with passion fruit and raspberry which probably contained so much agar agar, it had a very unpleasant dry texture and no discernable flavour whatsoever. A big, comforting hug and hankerchief to dry the tears afterwards for the red housewine, Versatil from 2013, which had a luxurous and velvety mouth feel and ended on a tanine-dry note. It turned out to be one of the first wines in our brand new wine journal. 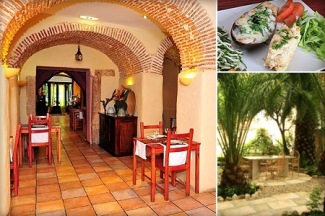 Reflecting on the experience as a whole, we would like to come back  but chances are that things will not evolve or change that soon. To my knowledge, the menu hasn’t changed in the last year or two or so. However, there are still a lot of dishes on the menu we find interesting (e.g. the four cheese lasagna) and the staff is super nice (our waiter was extremely courteous). The Zen or Chi-kung lunches or dinners we haven’t tried, but surely they can be interesting experiences if you’re into that.

Maybe by international standards, “Jardim dos Sentidos” is a bit too swing-and-a-miss and culinary confusing with a lot of dishes being one or two steps away from being “complete”. Some of the items on the menu are much better than others and you’ll be either pleasantly surprised or mildly disappointed. But hey, this is Lisbon and veggie food is still in a research and development phase. Taking that into consideration, you could do a lot worse than this one. (Nout Van Den Neste)