Speciality coffee! Avocados! Muesli! Scandinavian styled interior design! If these keywords get your metaphorical tail waggling, then maybe “The Mill” – coffee shop by day, wine and tapas bar in the evening – is your kind of place. Do bring some money and try not to think too much about how “The Mill” might also be contributing to the rapid, destructive gentrification that is taking over Lisbon. That being said, they do serve a damn good coffee. If you are interested in setting up your own gentrified coffee shop as well, we’ve made a ten-step guide for you, taking “The Mill” as a prototype. 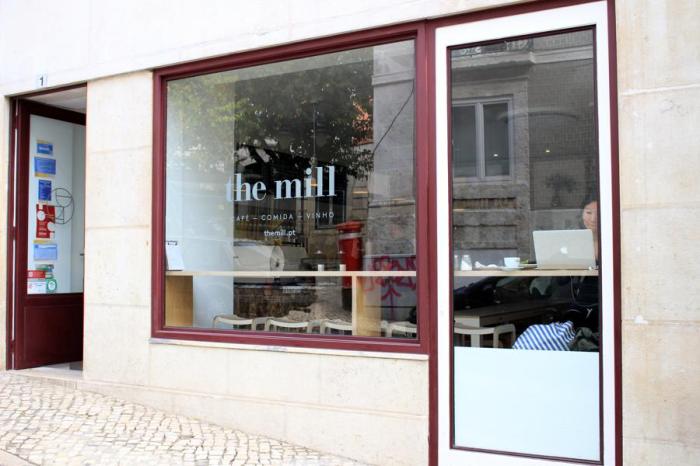 To cap it off, some final thoughts about “The Mill” and the context in which a bar like this has come about:

Before you think we like pissing on people’s fancy bonfire roasted marshmellows (well, we kind of do, but that’s really besides the point), we do feel strongly about looking at cafés, restaurants and bars in the broader context of a neighborhood and to a larger extent, of a city. Gentrification is a very complex social issue with pros and cons and we will be devoting more time to the diverse aspects of gentrification in the culinary scene here in Lisbon in an upcoming feature about it.

Sure, we’ll gladly confess that we haven’t tried all of the food of “The Mill” and there might be some dishes on there that are worth your hard earned cash. Absolutely possible.

That is however beside the point. “The Mill” embodies so many things that are wrong with the current process of gentrification in Lisbon. “The Mill” is another ominous sign that the tourist center of Baixa-Chiado seems to be continuously stretching out its arms like a huge, sticky octopus. In the sickening tow of higher rents and tourist sublets are a string of restaurants and bars that have elevated prices but don’t offer anything really worth paying for or that you wouldn’t get in a regular pastelaria or tasca. Unless you don’t care about that because you have more money than Portuguese people regularly do (especially in comparison to the few who still live in neighborhoods like the one where “The Mill” settled into).

You probably know where we’re going with this. Asking 5 euros for a glass of wine is totally acceptable (presuming then that the wine is worth it), but not when that is your starting price for a glass of red wine as is the case with “The Mill”. Maybe the rent of “The Mill” is rather high. Maybe their wine is something seriously special, from organic co-ops or a family where the dog was trained to fetch the ripe grapes at the right moment. Who knows. But if you can actually pay for a custom-made La Marzocco coffee machine, something tells us money might not be that much of an issue for you.

No matter what though, some extra nuts or fruits for the Bircher muesli, or just a bit of love for a bigger portioned toast with actual good cheese (we’re in Portugal, not cheese-banned Russia), good quality bread or something else that would have made it stand out, would have made us feel more sympathetic towards this place. Asking a bit more money for something unique or special is totally fine and justifiable, but “The Mill” is either to self-involved or too socially unaware to make an effort in catering to the locals and offering something memorable. There are not enough “sun-ripened tomatoes” you could put on your menu to make up for that capital sin.

One thought on “THE MILL: How to gentrify your café in ten easy steps”