LX Factory has unfortunately become one of these places that initially started off with the best of intentions, but is now more like a shark’s lair, full of places, cafés, restaurants, art boutiques and the likes looking to make a quick buck from rich yuppies, hipsters and tourists. In some ways then the beautifully rustic decorated piece of 70s nostalgia that is Cantina LX is in terms of price-quality a bit of an exception to the LX Factory rip-off rule. Some of the food is really delicious, and some of it is just inconsistent. Thankfully, there’s the most impersonal service to carelessly guide you through your meal, in slow motion.

It’s funny but after about more than a year of doing this (going to restaurants, writing about it, taking photographs and pretending that people care about our very important opinions) we have developed something we call “a five second instinct”. Already by the way a restaurant answers a phone call when we want to make a reservation or by the way a waiter welcomes you and guides you to your table, we have a very good feeling for what the place, food and experience as a whole will be like. From Cantina LX’s cold reception – barely a “good evening” or let alone a smile – we did not get the best of vibrations.

We arrived just when the restaurant opened its doors for the evening service at 19h30 and had to stand around awkwardly and wait a couple of minutes until we were allocated a corner of one of the few non-reserved tables. Fair enough, you might say, were it not that most of the people who had booked a table only turned up when we had finished our meal. The waiting staff in the meantime was extremely busy putting cheese and bread and olives on empty tables and was probably unaware of the whole “turning two covers in one evening” concept. For that matter, the service was painfully slow and mind-boggingly careless and distant.

It just brought the whole experience down really. When our waiters weren’t standing around talking to each other and / or pleasuring their phones with their fingers (I’m trying to be polite here), they absolutely had no time for polite frases that are quite easy to learn by heart, such as “there you go” or “thank you” or show the least bit of passion or interest for what they were doing. We were sitting there with our coats on and only after other people started trickling in – after about half an hour or more – they turned on the heater. Way to care guys.

They were also apparently at a loss for words to ask us whether we liked the food or not (always a bad sign) nor were they knowledgeable when it came to the menu, one waiter couldn’t indicate whether the pudding had a lot of eggs or not (because we really hate eggy pudding). Not that we expect the waiters to have tried everything on the menu, but at least they should know what is in the food that they serve. Or have they never heard of people with food allergies for example? 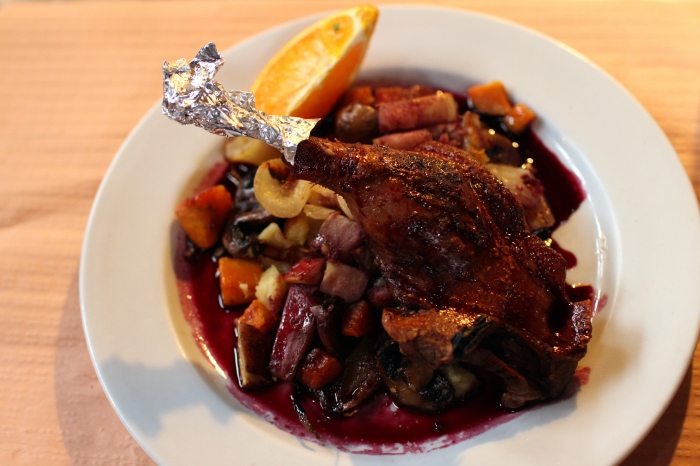 Thankfully, the food made up for it, to some extent. They have a wood-fired oven in which they re-heat some of the food, such as the duck legs, the octopus, potatoes and the likes. They also use the oven to bake their homemade white bread, which had a nice taste, but in places was just seriously undercooked and had no particular flavor of the oven itself, unfortunately. We fared much better with the main dishes. The melt in your mouth Iberic pork cheeks a friend of ours had ordered were amazing, as was Nora’s duck leg which was crispy, tasty and accompanied by a nice vegetable melange and a zingy red berries sauce which cut through the richness of the duck beautifully. My lamb stew was more like a soup, full of garlic and rosemary flavors, soft cooked potatoes and finished off with fresh coriander. Quite yummy. 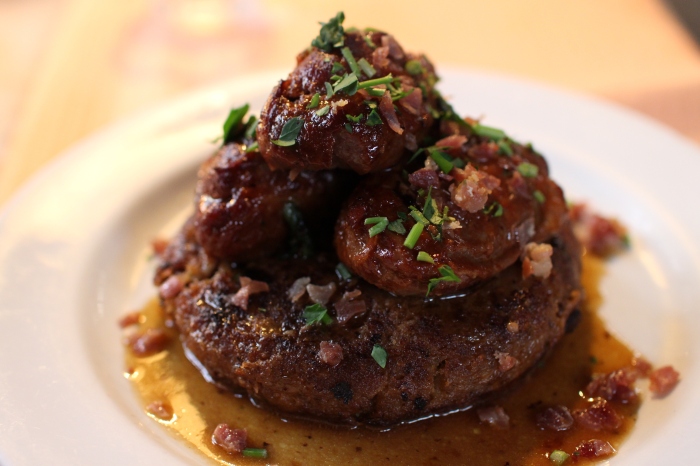 It was however in the little things that the lack of passion really became apparent, especially if you’re a bit like us and leave no stone unturned. The “migas” (fried bread) that accompanied the pork cheeks were nice but featured overcooked green asparagus you wouldn’t even know were there if you were to eat it blindfolded (a real shame, especially because now they’re at their tippy top best) whereas Nora’s duck leg became a bit dry the closer you got to the bone. My lamb dish was quite good, but maybe for 13 euros, I was expecting just a bit more: the meat wasn’t prime quality, mostly smaller pieces with lots of bone.

The dessert really undressed this place down to its hollow interior: we ordered a chocolate cake which after having waited for more than half an hour for our main dishes came in less than 2 minutes. The chocolate cake wasn’t all that bad, but we really didn’t pay 4 euros for a piece of cake that was sitting on a plate together with some badly whipped cream (it’s not rocket science people) for a couple of hours. It was the already melted cocoa powder on top of the cream that gave it away, and the really dry crust gave it that kind of day old vibe you’re really not looking for when ordering a cake in a restaurant. It had an okay chocolate flavor and we probably would have been more sympathetic towards it if we had been served a freshly cut slice, which really is the least you can expect.

It sums up quite succinctly how we feel about the whole place really. The beautifully arranged clutter up on the walls, the wooden but badly isolated ceiling, the collage-like nostalgia feel of it all: it’s really something to behold, as is the echo and the noise you get as soon as the place starts filling up. It really confirms the main idea, from the impersonal service which is only quick when it comes to snapping your empty plates away, to the partially reheated food: this is a cantine. Delicious as the meat dishes were, you cannot help but wonder: what are you paying for?

Good question, even if I ask myself. Maybe it’s to help pay for the ellusive owner’s fancy car or something, because the money most likely doesn’t make it to the waiters – we’re just guessing here of course. No matter the restaurant, bad waiting service always starts from the top: whoever the owner might be, (s)he obviously doesn’t really care about this place enough to educate the waiters properly nor to inform them about the menu or keep them involved or passionate enough to transmit anything to the customers. Nor does (s)he care enough to really answer similar criticisms on Zomato with a personalized reply, instead falling back on the same copy-paste answer everytime: “Obrigada pela sua opinião. Os vossos comentários são muito importante para nós! Vamos continuar a trabalhar para melhorar os aspetos menos positivos!” It’s all a bit weird, (s)he never showed up that evening as far as we know and we have no idea who (s)he is, not even after some extensive googling.

If someone were to look at it objectively with a bit of perspective, one might even make an educated guess and deduce from all of the dark-skinned people working there that the owner probably doesn’t pay the waiters well. Make no mistake: we don’t care about skin color or where someone comes from – if you do, please unfollow and try your best to give yourself a proper kick in the butt – but sadly enough, Portugal (1) still does. The lack of social mobility in this country among people with darker skin color and / or people with migrant background (such as the former colonies of Cape Verde, Angola and Mozambique) is still a huge issue and many of them unfortunately still work for minimum wage or even less than that as nannies, waiters, etc. and with one or two exceptions, not many have made it into mainstream media or politics. (2) Sad as it is, darker skinned employees are most often a sign of cheap labor force rather than a sign of integration and equality. All of this of course, is in the case of Cantina LX mere speculation and we really hope we’re wrong, but there is something about this place that smells a bit “off”.

Granted, with all of the other rip off joints in LX Factory (the wretched Wish coffee anyone?), Cantina LX is definitely not your worst pick there. The meat was indeed beautifully cooked and all three of our dishes made perfect sense together and were very harmonious. It was just in the finer details you could taste and see the lack of care and perfectionism this place needs in order to stand out and merit return visits. So, Cantina LX is, to coin a phrase of a friend, a hooker in a mink coat. Meaning: it looks very beautiful and appealing (the beautifully decorated 70s styled space itself alone really merits just a quick peek inside) but walking away, you feel a bit used, awkward and sad.

(1) We’re talking about Portugal as a country on a social, economical and political level here.
(2) We’re just a culinary / gastronomic blog, but food and drinks is always part of a bigger culture and part of a collective memory and mentality. The whole issue of racism in Portugal is tremendously important and we’d love for it to change and get better. For more information, see: Portugal is race blind, but not for the right reasons
Or here:‘They hate black people’  (Cova da Moura especially in this respect is very important)
There’s also this book that talks about these issues and the historical background: Managing African Portugal: The Citizen-Migrant Distinction
Also interesting read is this: The colour that dares not speak its name: schooling and ‘the myth of Portuguese anti-racism’