Restaurants and cafés are always very ephemeral, but sometimes, when one of your favorite places disappears, a loss can be extremely hard to take. Such was the case with Miss Jappa’s space in Principe Real: first it was the home of Orpheu, a beautiful, cozy café which was then tragically replaced with Ucharia, a tapas-wine bar which was way too fancy for its own good. Thankfully, it has disappeared and now there’s the very recently opened Miss Jappa taking its place, a truly original Japanese restaurant with very accessible prices and simply put, beautiful food. 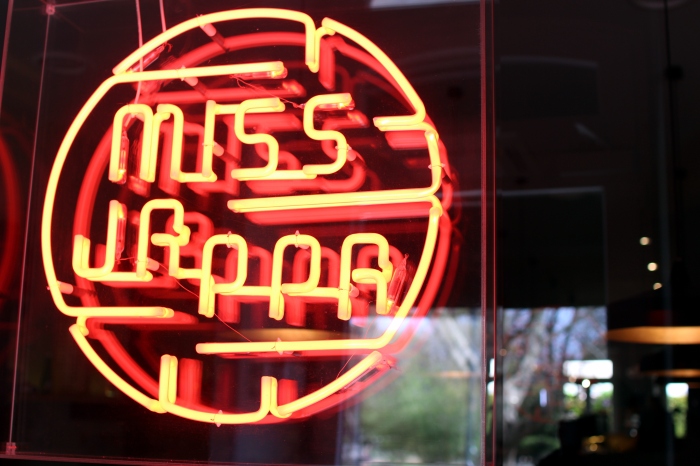 For those who have ever tried to venture into reasonably priced Japanese food in Lisbon: don’t sigh, we know how you feel. More often than not, it’s a travesty: ridiculous stuff like putting strawberry, pineapple or other fruit in combination with not so fresh fish are often common place in sushi restaurants run by mostly Chinese idiot chefs looking for a quick euro. However, with all of Portugal’s wonderful seafood and stiff fresh fish (which is still one of the things we love most about this country), you cannot help but wonder how it’s possible that so little good quality, reasonably priced sushi restaurants have popped up.

In any case, “Miss Jappa” doesn’t exactly fit into the category of a sushi restaurant. Instead, it’s a Japanese restaurant which has sushi on its menu, but so much more. We have never been to Japan so we cannot really give you any feedback as to how authentic the food was, but that’s also not really the point: as soon as you eat “foreign” food in a different place than where it originates from, you can always expect for it to get slightly adapted to suit the local clientèle, products or trends. The only question then is whether it’s delicious.

A good example is the Okonomiyaki, which is traditionally a thick pancake either the chef or you yourself can cook on a scorching hot grill. Now, as can be seen for example in the video from Eat Your Kimchi, the pancake is usually rather thick. At “Miss Jappa”, in comparison, we had a rather thin pancake with nicely cooked, tasty prawns, a crispy salad hidden underneath and the Japanese mayonaise on top. The lashes of dried bonito (tuna) on top were a first for me and added small bursts of pure umami. It was absolutely delicous, full of textures and flavors and it was a beautiful example of how a traditional, very non-fancy Japanese dish was elevated to a restaurant level without losing too much of the original idea.

Chef Anna Lins doesn’t even have any Japanese roots herself: she is the first female Portuguese chef to be specialized in sushi, which in a culinary culture (both Japanese and Portuguese) that is so dominated by men, is a welcome voice and addition. Anna Lins runs the restaurant in collaboration with Go Natural and even though we are a bit skeptical of the concept of Go Natural, Miss Jappa’s food certainly tastes right. Together they have created one of Lisbon’s best city centre restaurants that are open on food depraved Sundays when most restaurants, except for in Baixa-Chiado and Alfama, are closed.

It’s always a good sign when a restaurant takes care of every dish they serve, no matter how small it might be. Take the miso soup: normally, I’m not a fan but I absolutely loved the one that I had here. It was brothy, salty and with some delicious chunks of shiitake mushrooms to be scooped up by a lucky guest. Particularly memorable were the ramen noodles with shiitake, pumpkin, spinach and a poached egg on top. A perfectly poached egg is often difficult to do, but here, it was no big deal at all and a beautiful accompaniment to the rest of the dish.

There really wasn’t much to be faulted here: the service was personal, not too formal and quick and the background music wasn’t some Japanese-sounding Zen-nonsense. It all added up to the feeling that this place was the real deal and wasn’t interested in gimmicks. The same goes for the sushi. Even though we didn’t try any of the raw fish based sushi, we had a beautifully presented roll with a tempura of sweet, succulent soft shell crab (I would like to know where they got it from because I want to buy a couple myself too). If there was one thing to be criticized here, it would be that the pieces of carrot and cucumber in the sushi were a bit too “present” to really give you that persistent, intense crab flavour.

As we were getting kind of full, we decided to share a dessert and we picked a “leite crème” (basically a crème brulée) with a cream made out of black sesame seeds. It was a beautiful example of how “east” meets “west” or concepts like “fusion cooking” don’t necessarily have to end in culinary disgrace. The black sesame seeds added a beautiful nuttiness to the cream and the caramel of the crème brulée was brittle and crispy. We were impressed, yes. 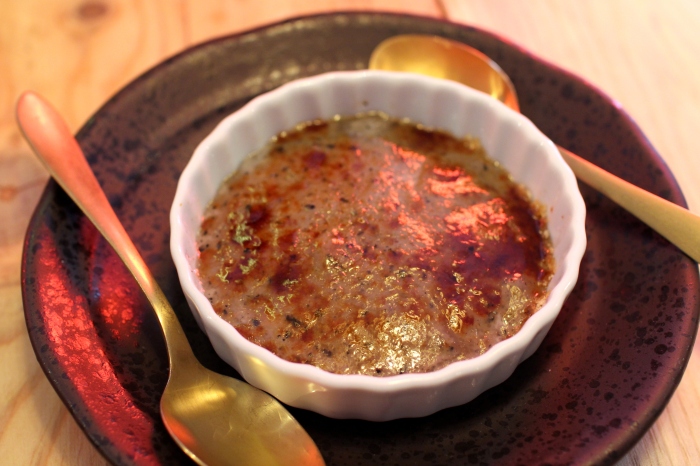 Not only was all of the food delicious, I could just sit there and drink liters of the fabulous tea we were served. Literally, all afternoon. The sencha green tea was very light and clean whereas the genmai was darker, intenser and had a lovely nutty basmati-rice flavor to it, which makes sense, since it’s green tea combined with roasted brown rice. It says a lot about the place that they manage to make the specialty tea as memorable as the meal itself, as does the interior design, which doesn’t fall back on oriental-Japanese clichés or stereotyping. It’s just an ode to the ingredients from sake to dried shiitake mushrooms lying in bags of 3 kilos lying on the floor.

From the green walls to the mirror on the right, it’s clear that Miss Jappa wanted to make sure that the in itself cramped room as spacious and inviting as possible and in that, has clearly succeeded. Like the food, the decoration is simple, but with enough surprising details to keep you intrigued: the red, empty bird cages serving as lamp shades hanging above the bar or the small puppet of the girl sitting on a swing hanging 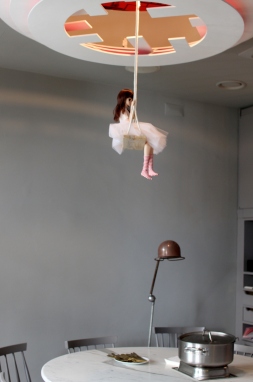 from the ceiling in the back part are just very cute but lovely additions that kind of make this place different.

There’s many reasons to come back to Miss Jappa, not only to try some other dishes we missed this first time around, but also, now that the days are getting longer and warmer, we very much look forward to eat outside on the small patio. After our unlucky past couple of months of dealing with cheffy, fancy food, finding and discovering the smooth service and food of “Miss Jappa” was such a delight, it was probably one of our best gastronomic experiences of this year. Having paid not more than 13 euros per person, we left for our Sunday afternoon walk around Lisbon. Life really doesn’t get much better than that.

One thought on “MISS JAPPA: A burst of umami”