(NOTE: This place is now unfortunately out of business! R.I.P.)

Sometimes, going once to a restaurant isn’t enough to know what a place is like and “Le Moustache Smokery” warranted several visits before we could definitively make our minds up. The place, conveniently located in the gastronomic hotspot of Praça dos Flores, prides itself in home smoking all of the meat (and other things) that they serve: it’s very trendy in the U.S. but a unique concept for Lisbon (and by a larger extent, Portugal). And it’s really, really close to being amazing. 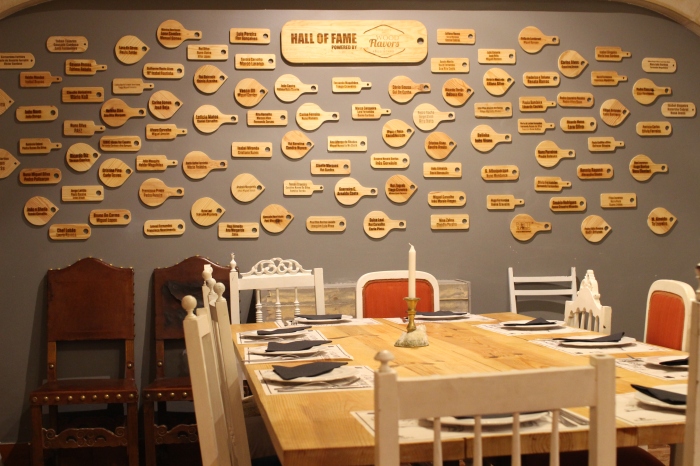 We and “Le Moustache Smokery” go back quite a while, so let’s make a flashback to last spring, when there was the Trampolim event in and around Praça dos Flores, when several local cafés, shops and restaurants had special things on offer and there were interesting food and non-food related events, such as opera sung in the fish shop on the square. “Le Moustache Smokery” provided a demonstration of their house smoker, and since it was spring, offered up some lovely smoked snails in a herby broth. They were some of the best snails both of us have ever had and ever since that day, we had “Le Moustache Smokery” marked as a place we should go back to and see what else they could do. 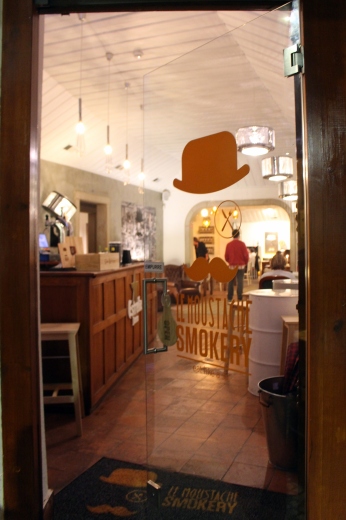 In a way, “Le Moustache Smokery” is jumping on the hipster bandwagon. You might have guessed it already by the name of the place which most likely is a reference to the bad ass moustache that the headchef Daniel Cardoso is sporting. They also have a homemade craft beer on offer with smoked hops and the first thing you notice as you walk in, is the gin bar, a drink which neither of us have really gotten into. So far, so hipster but if you manage to look past this, you’ll pretty soon discover a place that knows how to treat their meats righteously.

Meaning: slow cooked, smoked sticky ribs and, my personal favorite, smokey fennel sausage with some good quality pork meat. Lovely brown skin, but falling apart and melting away in your mouth. It’s so difficult to come across a seriously good sausage here in Portugal sometimes, but this place has absolutely nailed it. Not to mention the accompaniments: each of the dishes comes with a fresh rocket salad and delicious, homemade pickled onion and cucumber. You can also choose one side dish to accompany your meat and pay 3 euros extra for every extra accompaniment you choose. Even though the classic American macaroni and cheese and bean stew were both lovely, they were a bit too heavy in combination with the meat, but hey, if it’s a slice of America you ordered, a huge, massive chunk you will get. We were only “yummy” about the mayonaise-heavy coleslaw but were all gushing “ooh”‘s and “aah”‘s over the homemade potato chips which were supercrispy and tasty. It’s easily the best potato chips you could hope to have anywhere in a land where soggy chips are the greasy king. We have no idea exactly how they made it, but with this recipe we’ve given you for free, for sure you’ll get amazing, similar results.

We haven’t tried any of the fish on offer, but their vegetarian shepherd’s pie we would always go back for. Last year, it won them the Lisbom award for the best vegetarian dish without tofu. The way the slightly acidic tomato sauce with gooey onions play off on the sweet potato mash on top is astoundingly simple but delicious enough to keep you coming back for more without it becoming boring. Nora’s had it on both times that we visited “Le Moustache Smokery” and the only thing to say about it is that maybe the first time it was better because there were some mushrooms thrown into the sauce as well. But for all of the vegetarian restaurants that we’ve been to and still plan to go to: take note because this is how a good vegetarian dish should be. 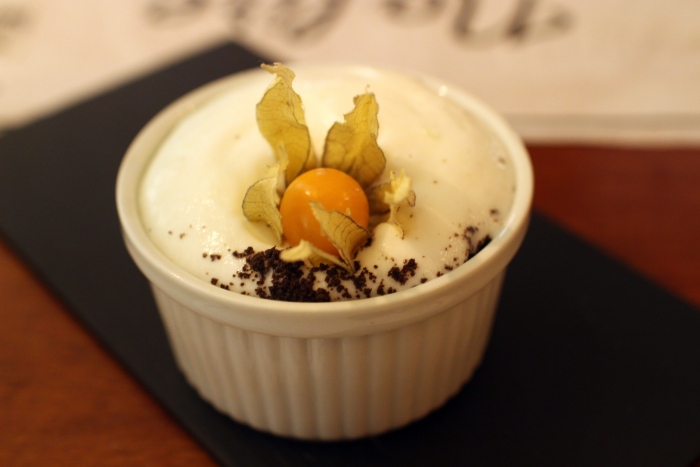 Great as all of that might be, there is still some room for improvement. Foodwise, this restaurant seriously needs to up their game when it comes to desserts. Last time in November, we had quite a disappointing, runny lime mousse with chocolate chunks and this time it was the rice pudding which left a bit to be desired. Too sweet and eggy, it was a very Portuguese styled rice pudding and even though the glass of Abafado dessert wine with aromas of tableside smoked cinnamon was a nice touch, it was a bit too much sweet on sweet and the dish as a whole didn’t really match up to the quality of the main dishes. Oh, and what’s with adding watercress on top of a rice pudding? If I’m not supposed to eat it, then don’t put it on my plate, it doesn’t make sense.

Another thing is the appetizers: “Le Moustache Smokery” doesn’t really do appetizers but rather serves you tapas instead. That’s a nice idea and you can also go there and just have tapas, but since they’re a restaurant, it would also have been nice to see some real appetizers on the menu too. There’s that and the fact that the presumed Korean-styled chicken wings (called “Gangam style”) had been nowhere near Korea (apart from the sesame seeds) and at 4.5 euros, it was a bit too expensive for how unadorned and simple this cheap cut of meat actually was served. The smoked hot potatoes were a much better choice, though here you didn’t have much of the smokey taste. It’s nice, but maybe taking into the fact that many people order it as the start of the meal, it doesn’t wow you as much as the main dishes do. 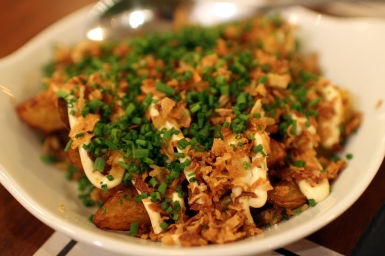 Finally, there’s the décor, the separate elements of which don’t really work together. Even though they were also featured on our best of of 2015 with another very special award related to the interior design, the restaurant as a whole navigates unstylishly between cantina and restaurant. The upside down pots hanging from the ceiling as lampshades, the wooden cutting boards mounted up on the wall, it’s all very nice, but then the huge space without any subdivisions and the white tiles and ceiling don’t really match the “homey” feeling this place is going for. It’s a bit awkward when you get allocated a small table in the middle of the room and when it’s full it becomes quite loud as well.

In a (smoked) nutshell, this restaurant is definitely on its way though. On the official website, head chef and owner Daniel Cardoso explains how he wanted to create “something different, comfort food, something which Lisbon didn’t know yet”. In that respect, his mission is definitely accomplished. Price quality, it’s a pretty great restaurant with great wine, some fabulous meat dishes and one memorable vegetarian dish. The service could still be more personal and warm and the same goes for the décor. “Le Moustache Smokery” is a couple of improvements away from being the beautiful, captivating gastronomic experience it has all the potential to be.

2 thoughts on “LE MOUSTACHE SMOKERY: Heavy smoking in Portugal (OUT OF BUSINESS)”