On top of the square of Largo Doutor José Figueiredo near the Museum Arte Antiga, lies “La Boulangerie”, which, as you might have guessed by the name, is a French-styled bakery and café. We went there last Sunday for a brunch and left happily carrying two wonderful loaves of bread and one delicate, crispy croissant. Mind you, this place does come with a serious warning and requires bringing a big wallet.

To start of with why you shouldn’t miss this place: the croissant and the classic pain au chocolat. Both are crispy, buttery, with a beautiful, pillow-like, multi-layered interior. Just as you would get them in France. Both are a tad more expensive than a Portuguese “croissant” (1,20€ for the croissant and 1,60€ for the chocolate roll), but the crumbly crunch and the buttery aftertaste assure you that this is the real deal and totally worth your money.

The same goes for the bread. Anyone who lives in Portugal for a long time, knows that finding really good bread can be as tough as so much of whatever it is that often passes here for bread. I think my life expectancy gets knocked down by about a year everytime I see a Portuguese baker or seller showing with a great deal of pride to their customers how soft (in Portuguese “fofo”) their bread rolls are. Here, none of that: the bread has got a thin but crisp crust, both the white baguette and the dark oats bread that we took with us. The white bread that accompanied the brunch also had a deep, slightly sour flavour and was in terms of texture truly substantial with a nice, even rise.

Price-quality, both the croissants and the bread here are very good options and would as far as we are concerned, justify a walk around the block just to get our greedy hands on them. The place as a café however did give our eyebrows some serious workouts. Sure, it is cozy (there’s some cinema-chairs and the music playing in the background solidifies the hipster buzz that hangs around this place) but also chaotic due to the awkward arrangement of the room. Most importantly though, it’s the price that really makes it not a very attractive place: 15€ is a lot of money (by Portuguese standards at least) for what was a substantial but not very original brunch (taking the awesome, accessibly priced brunch of Vélocité as an enlighted standard here). That being said, for some obscure reason, brunch here in Lisbon always seems to be expensive no matter where you go, maybe because it’s still a new thing and there’s not a lot of competition in that respect that could knock down the prices a bit.

what is supposedly a more fancy take on a brunch, judging by the price. Granted, the scrambed eggs were nice. The addition of strawberries in salads or the fact that you can also put stuff like salmon, goat cheese or other stupid accompaniments like eggs sunny-side-up in your croissant as if it were a hamburger (and it is NOT) really gives you the feeling that they are gastronomically still stuck in a serious time warp and are not as bright as they think they are.

Sad as we are to say it, you do get the feeling that the guys running the place are very smug and charge a lot of money for it, judging by the menu. Charging 6€ for some cooked eggs (which aren’t even indicated on the menu as being free range) which depending on extra ingredients can lead up to around 9€ a plate is even for Lisbon bordering on scandalous and just plainly not social. So is paying 10€ for a homemade pizza which ultimately is only bread, tomato sauce and cheese. 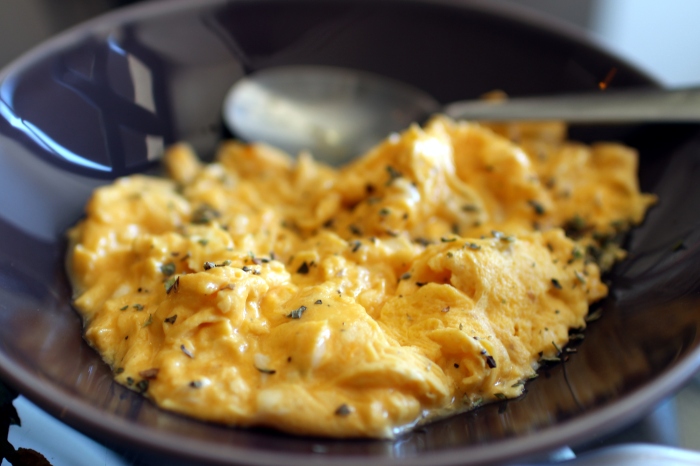 Choosing strategically is the message here. The brunch for 15€ is in comparison to the rest of the menu relatively cheap and the same goes for the toast with cheese which Nora had. We don’t know for sure but maybe some other stuff on the menu might be fairly priced too. Be aware though that you’re gonna have to pay more if you want to sit outside (the price difference really depends on what you order). Case in point: the brunch will cost you a wopping 18€ if you want to have it while peacefully overlooking the beautiful 18th century square of Doutor José Figueiredo. Best have a Panama account tucked away somewhere if you want to be a regular here. 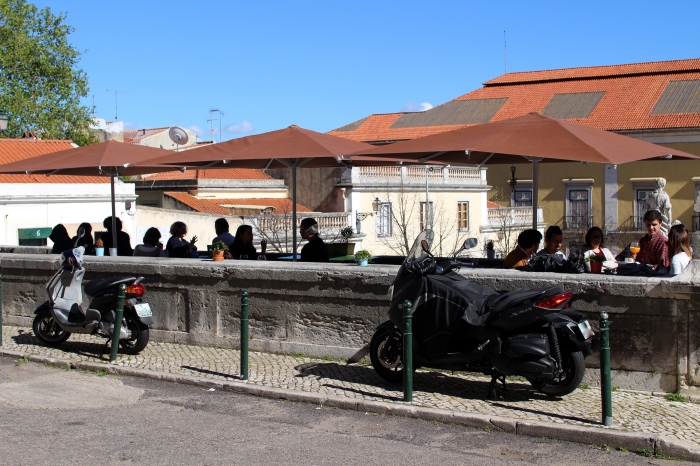 It’s not that we’re cheap, but it’s a matter of principle: the extra prices aren’t announced on the menu, you just get a differently priced menu when you sit outside. Clever but bordering on the unethical – in Chiado elevated prices might be understandable, but this is Santos. Get real. “La Boulangerie”, like so many other restaurants in town, pretends to offer something “exclusive” which in terms of quality and execution, judging by the brunch at least, is mostly very mediocre and has low-cost basic products. It’s another first class example of iditotic elitism (of which you’ll find many other examples on this blog) which doesn’t add anything new to the local culinary scene and for sure will scare off a huge part of the local community and / or only attract a very specific sort of clientèle, such as ravenous tourists coming back from a walk through the nearby museum.

So, hurrah then for “La Boulangerie” and their incredibly clever attempt at further solidifying gentrification! Who needs locals anyway, right? Who needs restaurants that contribute to communities, that serve as meeting points for all walks of life? Sure, we’ll gladly come back for the croissants and the bread, both of which are some of the best you’re likely to get in town. However, we’ll leave everything else on the menu aside. It’s not because the bread and the croissants are exactly as they are in France, that the prices of most everything else on the menu should be like that too.